In the latest Above Grade blog post, Colby Gilbert shares his experience during the Global Initiatives 2019 Alternative Summer Break in Chiang Mai, Thailand.

The Chiang Mai, Thailand trip was an incredible experience into a vastly different culture that also allowed the travel group to volunteer in a meaningful way. Immersing myself in a different culture certainly was highly impactful and an unforgettable experience; being an aspiring civil engineer, Chiang Mai’s infrastructure as well as our construction of the fence garnered most of my interest. By riding through and roaming the city and working on the service project, I was able to get a deep look into a different execution of infrastructure and help build a useful structure. Three facets of Chiang Mai infrastructure were most noticeable and very different from their American counterparts: road systems, urban storm water runoff, and religious structures. The road systems are seemingly well-designed and follow similar design standards to those found in East Tennessee, except for the practice of driving on the left side of the road. One challenge faced by Chiang Mai traffic engineers, and one not prevalent here locally, is a deviation of use from the roads’ intended designs. While the roads in no way felt unsafe, many drivers in Thailand generally use the roadways as intended, but there is apparently a lack of strict traffic law enforcement, leading to deviations from intended use such as not following lane markings. This human factor creates a significant challenge for Chiang Mai traffic engineers.

Chiang Mai’s urban storm water infrastructure is the most interesting of their systems to me. To handle run-off, there are foot-wide channels paralleling most sidewalks and side streets, which are covered in concrete tiles having semi-circular gaps at each end to allow water infiltration. Flush with the surface grade, they serve as tributaries to larger channels that run throughout the city. While I was not certain of their purpose, this collection of channels seems to effectively transport water away from the city. In Knoxville, such systems are mostly hidden and only noticed through intermittent grates near sidewalks; however, in Chiang Mai the system is noticeable and affords a good look into its workings. 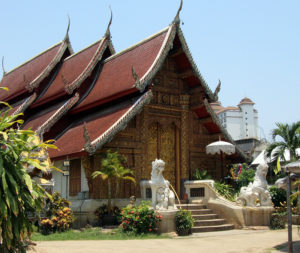 A temple in Chiang Mai.

The Buddhist temples of Chiang Mai certainly vary from the Baptist churches to which I am accustomed. The grandeur of these temples is inspiring, and the ornate coloring, imagery, and sculptures signify Chiang Mai’s predominate religious infrastructure. While Baptist pews are home to me, I cannot help but appreciate the time and effort put into these temples in order to honor and respect their religious idols.

As a way of giving back, our group of undergraduate engineering students constructed a fence; moreover, this experience was very rewarding and elevated the trip. At the boarding house where the children lived, a portion of the perimeter of the property was comprised of concrete pillars with mangled-up, rusted barbed wire cast-in. Both unsightly and unsafe, this perimeter was replaced with a steel framed fence and composite decking. On the first day, we began by splitting into two groups; one group worked on removing and compiling all of the barbed wire while the other was tasked with weather proofing the steel with an anti-rust coat. Once the barbed wire was removed, square steel base plates were secured to the existing concrete base pony-wall. On the second day, we mounted the remainder of the base plates that had not been installed by either our group or the “father” of the facility. After installation of the base plates, hollow square steel posts were welded to the base plates followed by securing three rows of hollow rectangular rails. As the structure of the fence was completed, the composite fence decking was secured to the fence rails via screws. Installation of the fence decking was completed by the end of the third day. This fence was a fun, exciting, and great way to serve others. In conclusion, being an aspiring civil engineer, infrastructure is my passion, and this experience reinvigorated that passion through new perspectives on infrastructure. I truly hope more engineers get the opportunity to engage in global experiences, such as the one I participated in, and find a new perspective that either bolsters their personal or professional life or both.

» Read more posts about the Global Initiatives’ trip to Thailand by Tickle College of Engineering students.